A culinary playlist: Italian hits to get you in the mood while cooking pasta 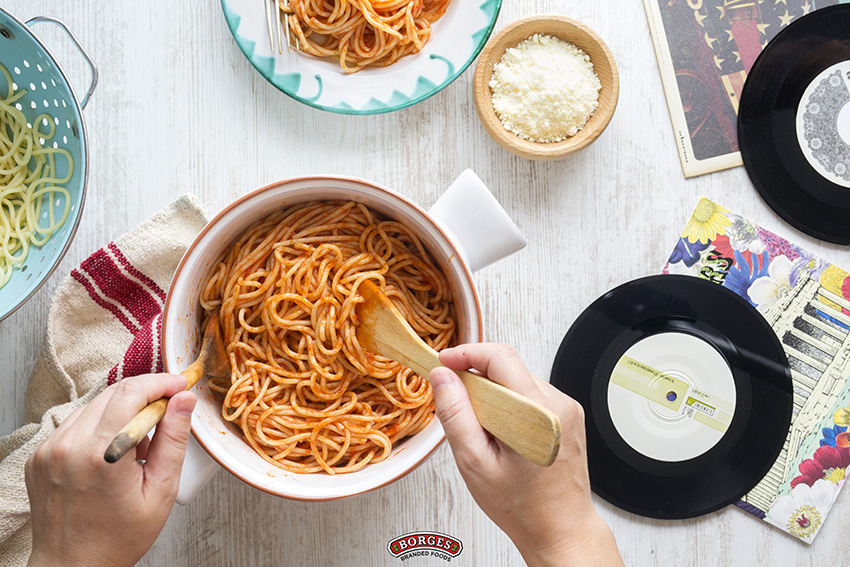 Pasta is one of those irresistible foods you just can’t help eating long before it ever reaches the table. While it’s still cooking and you’re making the sauce, with an eye on the timer to make sure you don’t overcook it, make the most of this wonderful process that ends with a flourish of grated cheese and—why not?—a glass of chianti. And what better way to cook pasta and practise what we now call mindfulness than to the sound of one of these great Italian hits? Buon appetito!

‘Spaghetti a Detroit’, by Fred Bongusto. Half children’s song, half background music from Woody Allen and Mia Farrow’s local jazz club, this unmistakably vintage hit makes its intentions very clear from the start: “Spaghetti, pollo, insalatina e una tazzina di caffè”. There isn’t much more you need to be happy in life, even if, like poor Fred, you find yourself in Italy far away from the love you left behind in Detroit.

‘La pasta asciutta‘, by Fabrizio Bracconeri. A song for all those who are so wild about pasta that nothing else in the world matters. A song that revels in the ingredients of a dish into which the singer “throws himself heart and soul”. It starts off in gravelly-voiced Latin crooner style but then bursts into a chorus straight from the summer festivities in any Italian village. It’s the ideal number for dancing tightly against anyone who shares with you an eternal, indestructible love: the love for pasta.

‘Buon appetito‘, by Enrico Montesano. Let’s be honest: Enrico Montesanto is no Frank Sinatra and the lyrics of “Buon appetito” weren’t written by John Lennon. But who cares? Just slip into such captivating rhymes as “chi mangia la mozzarella, chi mangia la papardella, chi mangia la tagilatella…” as the barrel organ pipes out the tune, and you’ll wish for only one thing in life: to burst into your neighbours’ house and dance around the kitchen with them without a care in the world, as if you had just stepped into a musical.

‘Ma che bontà‘, by Mina. The doyenne of Italian singers, this versatile yet enigmatic woman can pluck a tune from her prolific oeuvre for any moment in your life. So, as you’re cooking pasta, let Mina whisper in your ear about the pleasures of eating: “Ma che bontà, ma che bontà, ma che gustino questa roba qua”. Mina never fails to pull off the perfect combination of Cher, Raffaella Carrà and Lady Gaga with her powerful, universal messages: she doesn’t trust anyone who doesn’t like eating.

‘Il vino‘, by Piero Ciampi. Dante said that wine sows the seeds of poetry in the heart, and Galileo proclaimed that wine is sunlight held together by water. There’s no denying that wine and pasta make a winning combination and the mere thought of the glass of wine that awaits once you’ve finished the recipe makes the process a whole lot more manageable. Once the strains of “Il vino” start to sound, you’ll feel yourself whisked away to the gently rolling Tuscan countryside before a chequered tablecloth with a wonderful afternoon ahead of you. “Ma com’è bello il vino, bianco, rosso è il mattino, sento male a un fianco”, says Ciampi, wracked by pangs of existential sorrow as he bemoans this ephemeral life.

You can enjoy each song clicking on the title, or listen all of them on our spotify playlist.