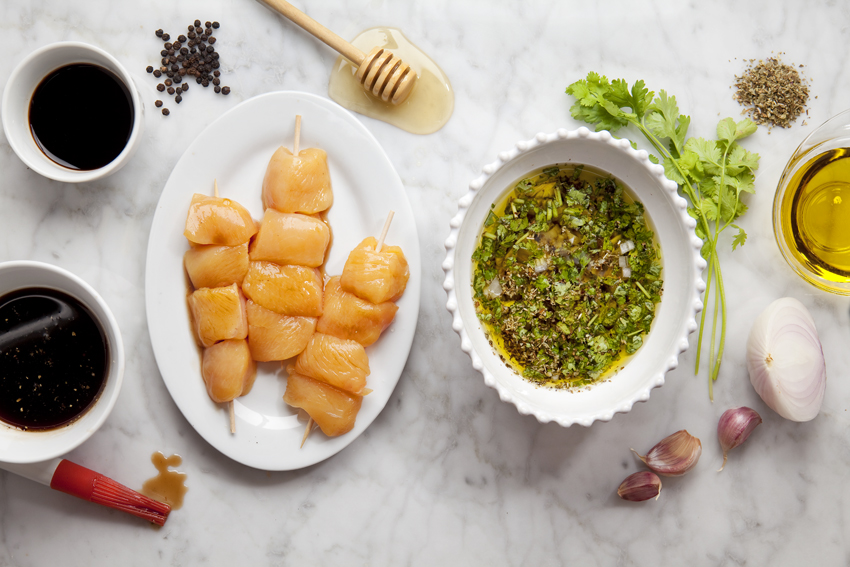 You’ve invited some friends over for a barbecue and fancy preparing something different. Forget about hamburgers and sausages—try out some new flavours. You’ll be surprised at what you can create with a bit of time, and you’ll soon have everyone wanting the recipe.

Liven up the meat and get marinating!

We all know that good-quality meat works best with as few extras as possible. However, you can throw a bit of rosemary and thyme onto the coals to add an extra aromatic touch, and how about making a marinade? You’ll get fresh aromas and flavours and extra-juicy, tender meat.

Here are two quick and easy Mediterranean marinades to get you going. The first one needs three soup spoonsful of honey, the same amount of vinegar and a pinch of black pepper. The second, a soup spoonful of oregano, one crushed clove of garlic, a glass of extra-virgin olive oil and a pinch of black pepper. You can scale up these amounts to make the required quantity for the meat you’ve got.

The method is very simple. Mix all the ingredients together, baste the meat and let it marinate for at least four hours. You can even leave it overnight. When the barbecue is ready, get the meat on! You could use the first marinade for chicken brochettes, and the second one works wonders with red meat.

The secret is in the sauce

Another way of giving a classic barbecue a fresh twist is to make some sauces for guests to add themselves. One favourite that never fails is “chimichurri” —perhaps not surprising given that Argentinians are the kings of the barbecue. But how about giving it a tweak? Try the following: six spoonsful of fresh coriander, three cloves of garlic, half an onion, a spoonful of oregano, a glass of extra-virgin olive oil, a glass of vinegar and a pinch of salt. Chop all the ingredients very finely and mix with the previously shaken oil and vinegar.

Another perfect sauce for barbecued meat—this time with a Turkish and Lebanese flavour—is pepper and walnut “muhammara”. Thicker than “chimichurri”, it is made with 300 g roasted red peppers, the juice of half a lemon, a clove of garlic, a soup spoonful of breadcrumbs, 100 g walnuts, 100 ml extra-virgin olive oil, a teaspoonful of cumin, half a teaspoonful of paprika and half a teaspoonful of salt. Mix all the ingredients together in a glass and beat until you have a smooth mixture. If you lightly toast the walnuts before grinding them, you’ll get a different flavour. This sauce also goes well with carrot, celery and cucumber crudités. A good salad, a few litres of cool sangria and you’re all set.